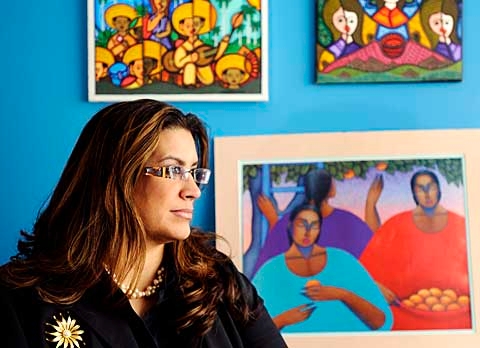 EDITOR’S NOTE: This is the first in a two-part series.

ROCHESTER — Sometimes, all it takes is a certain smell.

That’s when Marisol Ramos-Lopez is transported to a moment in time during her childhood when she was sexually abused by her uncle. Ramos-Lopez endured years of this abuse in silence — keeping the secret because of his constant threats that she would not be believed; that she would bring shame to her family. She doesn’t go into graphic detail in talking about the abuse but the crack in her voice and the tears she strains to hold back tell all about the pain she suffered.

"Everything you can image that happened, happened," she stated matter-of-factly during a Jan. 19 interview at her office on Norton Avenue. "I could be sitting anywhere and a new flash will come to me. … And you just have to deal with it."

But let no one mistake her for a victim, Ramos-Lopez emphasized.

Just as importantly, she is passionate and committed to ensuring that no other child endures what she was forced to and is fiercely protective of her two sons, ages 5 and 12, attest Ramos-Lopez and her family and friends.

"I live by the notion that the worst thing that could happen to me already did," Ramos-Lopez said.

"She’s like a knight in shining armor waving her sword to rid the area and nation, if she could do it, of child abuse," added longtime friend Donna Turner.

Ramos-Lopez hit a turning point in her life several years ago during a birthday party for a friend’s 7-year-old daughter, who is now a teenager. That day, Ramos-Lopez recounted, she came face to face with what she must have looked like when the abuse was taking place. The girl resembled Ramos-Lopez at that age and had a similar flamboyant, outgoing personality, she explained; words that describes Ramos-Lopez to this day.

"I look at myself as I am today; I don’t think of myself at 7," she remarked. "And that really screwed me up just looking at her. … And I had to leave for a while because there’s nothing sexual about a 7-year-old."

From that moment, Ramos-Lopez decided that she needed to do find the good from the horror she had experienced.

She came out publicly with her story nearly a decade ago to raise funds for programs — at the Bivona Child Advocacy Center and the National Center for Missing & Exploited Children — that help children who have suffered abuse as well as offer education and outreach as a means to prevent such abuse. Her abuser was never prosecuted.

"Because it’s really bad that this has happened to you, but it’s even worse when a parent doesn’t believe that happened to you; and that happens a lot," she said. "In raising money for (treatment and prevention), I have figured out a way to deal with it and tell the story."

Her courage and perseverance were honored last fall when she received the Latinas Unidas’ Reconomiento Award for leadership achievement.

"Her commitment to working to help prevent child abuse and treat children who have been abused is a very, very strong personal commitment for her," Turner noted. "And if you talk to her for any length of time, you see that in her."

Loyalty, tenacity, perseverance and integrity also are words that describe Ramos-Lopez, said her sister, Carmen Ramos. Ramos and their brother, William A. Ramos, who is director of Intergovernmental Affairs for the Department of Commerce, live in Washington, D.C.

"She is a person who stands for what she believes in and is willing to dedicate her time and energy to it," Ramos added. "Without question, she is a ‘put your money where your mouth is’ woman."

Turner said that she first got to know Ramos-Lopez when the two worked at City Hall in the late 1990s. A Miami native, Ramos-Lopez moved to Rochester with her former husband, Richard Lopez, whose family lives here.

"I had very strict parents so I wasn’t allowed to go away to college," Ramos-Lopez said. "It was definitely something I wanted to do. I wanted to live somewhere else."

She earned her bachelor’s degree in communications from Barry University in Miami and flirted with the idea of being a broadcast journalist until a disastrous internship at Univision television. She then found her true calling at Aspira, a nonprofit organization focused on Latino youth leadership development, where she oversaw a public-policy program for high-school students. That led to work in government relations at Ryder truck services and then legislative analysis for Miami-Dade County.

Upon moving to Rochester, she found work in former Mayor William Johnson’s office through a network of friends. She worked her way up to chief of staff, a position she held for four years until Mayor Robert Duffy came into office, Ramos-Lopez said. Then while pregnant with her second child, she switched to her current job overseeing the city’s Neighborhood Enforcement department’s northeast quadrant office.

She also earned her master’s degree from Keuka College during that time.

"It was hard because I worked here and its’ not your typical 8-to-5 job," said Ramos-Lopez, who explained that she goes to community and neighborhood meetings as well as represents the city at any event that she is asked to attend. "I really don’t know how I did it. I think it was on pure adrenaline."

Ramos-Lopez added that she loves her current job. More than any other position she’s held, it has taught her so much about city operations as she assists residents with issues ranging from trash service to crime to housing to business development, she said.

"So this job really puts me in the middle of everything that’s going on in the city," remarked Ramos-Lopez, 40. "In my previous job as chief of staff, I did a lot of policy work. This is the nitty gritty stuff. And really this is where you can see a beginning, a middle and an end. You can see progress. And you really feel it’s a lot more emotional and a lot more stressful than my previous job because I am on the front lines."

Ramos-Lopez decided to put herself on the front lines of the battle against child abuse for the first time when she spoke at a Bivona fundraiser. Her sister flew in to be with her, her colleagues at City Hall presented her with a plaque for her courage and yet she still wasn’t prepared for the reaction she received. Everyone wanted to hug her, she recalled, but that’s the last thing she wanted.

"I remember when Mari decided to tell her story," said her sister. "True to her nature, she did it in a way that would make a difference. … By telling her story, she can demonstrate that believe it or not — it can happen to people who you would never believe. How they handle life moving forward becomes the inspiration. How they continue to believe in themselves and in others can fuel young people who experience the pain, the shame and the sorrow. Marisol is a fighter. She will not let this part of her life dominate her life in totality. That is an example for others to hear about and learn from."

"A lot of the time, people feel you grow up and you grow out of it, and that couldn’t be farther from the truth, " Ramos-Lopez added as she started to choke up. "You never let it go."

She continues to speak to groups large and small to fulfill her mission to not only prevent abuse but help other survivors persevere as she has done, Ramos-Lopez said.

Despite it all, Ramos-Lopez maintains a sense of humor about her public speaking: "I don’t puke anymore after I do it. The first few times … it was awful."