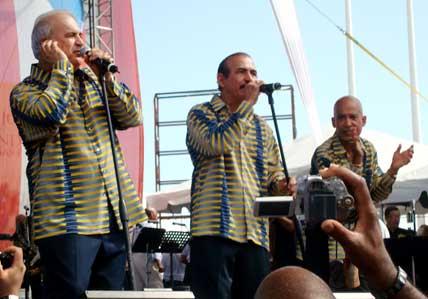 Saludos amigos, I’m Javier Rivera, and this month I will tell you what happened at the Dia Nacional de la Salsa.

This one day salsa festival serves a purpose of not only watching the best and the up-and-coming salsa bands but also honoring those people who have made a major contribution to this music. This year was not an exception. The event paid tribute to three gentlemen who truly are valuable to the spread of salsa music all over the globe: Johnny Ortiz, known as the composer of thousands of salsa songs such as "Catalina La O," "Lirica Borinqueña," " Lluvia de Tu Cielo" and many others; Hector Maisonave who managed many salsa artists during the salsa boom of the ’70 and early ’80 in New York City and was the first promoter to take salsa music to Madison Square Garden; and Angel Luis Cordova, otherwise known as "Paleco," who is the band boy of excellence in Puerto Rico.

At 1 p.m., the announcers from Z-93, "El Cacique," "El Hachero" and "El Buho Loco," officially announced the beginning of this year’s salsa festival. Julito Alvarado & Del Sur Al Norte began to warm up the crowd with their repertoire from their album "En Salsa." Next, Timbalero Don Perignon and his group La Puertorriqueña were on stage keeping the flame alive with music from their latest release, "Aqui Si Que Hay." Next, "The Musical Flag of Puerto Rico," El Gran Combo de Puerto Rico, burned up the stage with their unique style, leaving the crowd wanting for more. As a surprise, the announcers from Z-93 paid tribute to Eddie "La Bala" Perez, sax man of El Gran Combo who together with Rafael Ithier founded the group and has been playing for 57 years since the times of Cortijo y Su Combo.

The next two groups brought a touch of nostalgia to the event and to those old-school salseros that were attending. La Corporacion Latina went on stage and dazzled the thousands of fans at the stadium with their repertoire of classics such as "Vagabundo," "Desengaño Parte 1" and songs from their new album "De Regreso." Next, from Loiza, La Orq. Zodiac with singer Paquito Perez evoked a rush of memories that was felt throughout the stadium as the crowd began to sing and chant the hits "El Negro Zambu, "Tremendo Problema" and the classic "Panteon de Amor."

At this point in the event, the best musicians of Puerto Rico under the name of National Salsa Day band under the direction of Louis Garcia, plus Pedro Brull, Ray De La Paz, Luisito Carrion, Yolanda Rivera and Gilberto Santa Rosa, sang two songs each written by honoree Johnny Ortiz. At the end of the set all the singers came together to sing "La Raza Latina" along with Charlie Aponte, Jerry Rivas, Victoria Sanabria and Moncho Rivera.

Last but not least, after a 10-year hiatus, Grammy winner "The Prince of Salsa" Luis Enrique finished the day singing a medley of his romantic hits and also sang tunes from his latest production "Ciclos," including his hit "Yo No Se Mañana."

All in all, the 27th edition of The National Day of Salsa was the mecca of all salseros from all over the world. A day of quality music and camaraderie made with people from all over the Caribbean and where we all came united as one big family.

Rivera is CEO of Latin Roc Entertainment (www.latinroc.com) and host of Esencia Latina on Jazz90.1 FM/WGMC-FM radio from 6-10 a.m. Saturdays and on www.jaz091.org. Contact him at latinroc@gmail.com.