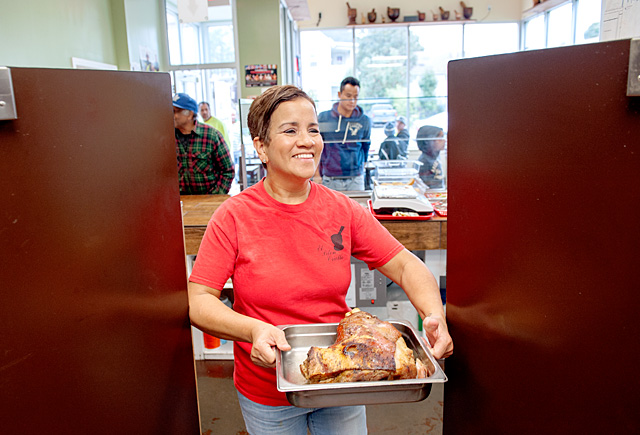 ROCHESTER — The clock had not yet struck 11 a.m., and El Pilón Criollo restaurant on North Clinton Avenue was already buzzing with customers.

Owner Librada "Zury" Brown stood behind the counter taking orders alongside her staff.

"¿Quieres cuero? Would you like skin?" she asked a customer, referring to the crispy outer shell of the roasted pork being ordered.

The restaurant — the first to be constructed from the ground up by a Latina on Clinton Avenue, city officials say — is one of many dreams that have come true for Brown, who left her native Puerto Rico decades ago to build a better life for herself and her daughter.

And last month, she was honored as this year’s Rochester Hispanic Business Person of the Year.

"I’m happy where I am," she said during an Oct. 1 interview at her restaurant. "Sometimes, I look back and wonder how did I get here. But it’s just about my family. Looking for a better life, that’s what brought me here."

Brown moved here in 1987 with her oldest daughter, Zulma Hayes, who is now 34. She chose Rochester because she had two brothers living here, Brown said. She worked several jobs before becoming a secretary in the Rochester City School District’s special education department.

But she had a love of cooking and people and needed to make a little extra money for her second-oldest daughter’s dance instruction, Brown said. She has two daughters, Christina and Alejandra, from her second marriage to Chris Brown.

So, she dipped her toe into the food business in 1992 by setting up a stand during that year’s Puerto Rican Festival. She enjoyed it but found she didn’t like relying on others to prepare certain components of her dishes, Brown explained.

"I don’t like to depend on anybody," she remarked."I’m very independent. You have to be."

She then began to develop her own recipes, which was challenging at first, she admitted.

"But you just do it," Brown said. "And every time you do it, it gets better and better."

And every year of the nearly 10 years that she spent cooking at the festival, people would ask her if she had her own restaurant.

"It was always in the back of my head," she said.

About six years ago, she decided to take a one-year leave from her job to explore the idea of opening her own restaurant, said Brown, 53.

"I didn’t want to leave my job until I was sure I would do this for the rest of my working life," she said.

She had considered staying at her job on a part-time basis but soon realized running a business and working another job would be too much, Brown remarked.

"And I liked the idea of being my own boss," she said.

At first, she bought an existing property up the road from her current spot and turned it into a small, take-out-style restaurant. But soon, the lines were out the door, said Florence Worden, who worked with Brown in developing a business plan for building her free-standing restaurant. Worden is a state certified business adviser with the Small Business Development Center based at SUNY Brockport.

"She was so inspiring. First of all, she was really excited about expanding her business," Worden said. "Her vision was so very clear, it made our project a lot easier. She knew exactly what she wanted. She was very persistent in being able to get the funds that she needed. And she was a joy to work with."

Another one of the great things about working with Brown is that she is receptive to advice, said Daisy Rivera-Algarin, senior marketing specialist for the city of Rochester.

"That’s a wise person," she added.

Brown had consulted Rivera-Algarin when she wanted to open her take-out-style restaurant. When Brown embarked on the journey to build her own place, Rivera-Algarin warned her that it would not be easy because of the specific regulations of commercial banking and funding construction loans. But Brown was determined, she said.

And even when banks denied her, Brown stayed the course, said Rivera-Algarin. Brown even remarked on those difficulties during the Rochester Hispanic Business Association luncheon when she received her award.

She encouraged everyone to turn every no into a yes.

"It’s what I love about her," said Rivera-Algarin. "She was ready. She was organized. She knew her stuff."

"I was excited and happy," she said of that day.

She also was happy about being named Hispanic Business Person of the Year, but she generally doesn’t like that kind of attention, Brown said.

Her recognition was well-deserved, said Kelly Mullaney, who first met Brown about nine years ago through their participation in Latinas Unidas.

"I’ve admired her big heart, positive attitude and down-to-earth demeanor; qualities that have earned her the appreciation of all who know her," Mullaney added.

And Brown has not only found success for herself, she has helped improve the neighborhood and shown what is possible, said Rivera-Algarin. Some people thought she was crazy when she built a restaurant with tall, glass windows and a fancy kitchen, she added.

"Now, people aspire their businesses to be like hers," remarked Rivera-Algarin. "They say, ‘I want to be like El Pilón. I want to have a nice building.’"

And her investment has led to other investment, including another restaurant and a bakery across the street. Her long lines also have returned to the point where she is adding space and parking, said Brown.

"Zury is the essential Latina businesswoman of our community, starting her business part time as a way to provide a better future for her family and bringing with it a positive impact in the community," Mullaney noted. "Her commitment, perseverance, professionalism and focus on her goals makes her a natural role model for other (people) who want to follow their entrepreneurial spirit. We need more Zurys in our city."