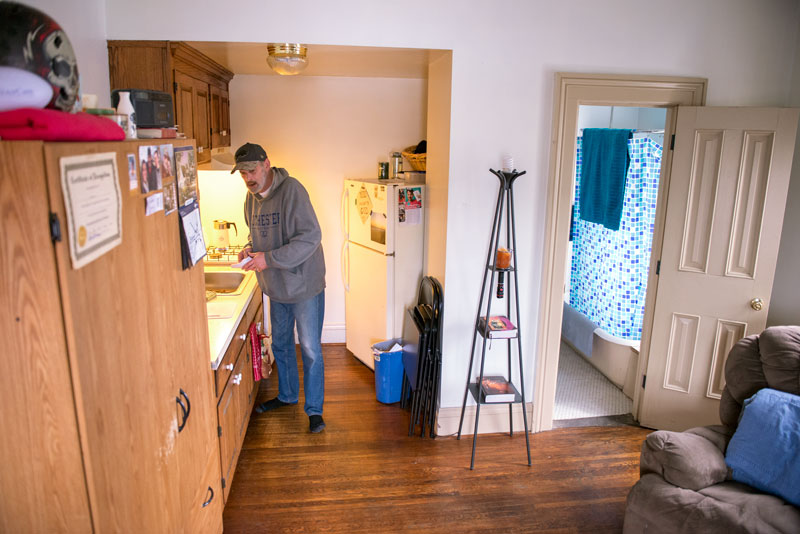 Jim Swan tidys his kitchen while at his home in the Dorothy Day House, a Housing First project that places homeless people.

The Catholic Worker community St. Joseph’s House of Hospitality, the homeless shelter House of Mercy and St. Mary Church began a joint Housing First program in 2011, explained Ryan Acuff, a local fair housing advocate who has been involved in the initiative. The concept behind the program is to provide individuals with stable housing, he added, before addressing any other issues that can cause homelessness, such as mental illness or substance abuse.

The local program began in a home on North Street that had been donated to the House of Mercy, Acuff said, and through private donations, apartments were provided to people who had been living on city train tracks. Subsequently, a two-story, 12-unit home on South Avenue was purchased in 2012 and named the Dorothy Day House, he added.

James Murphy from St. Joseph’s House of Hospitality said Housing First — which is promoted by the U.S. Department of Housing and Urban Development as the method to end homelessness — is an important model that all communities should take seriously.

“Done properly it would greatly reduce chronic homelessness and has been demonstrated to cost communities less money to just house people,” he said. “I wish we had 100 houses in Rochester like the Dorothy Day House.”

According to local and national advocates, providing the homeless with access to housing reduces the money government or community agencies spend on emergency shelter, emergency room care, long-term hospitalizations and imprisonment for such individuals, according to information from the National Alliance to End Homelessness (https://bit.ly/2AdGyKq). According to the alliance, one study found that providing services to an individual in a Housing First program produced an average cost savings of $31,545 per person over a two-year period, while another showed that a Housing First program could cost up to $23,000 less annually per person vs. housing in a shelter.

Several large cities — including Denver, Seattle and Washington, D.C. — also are employing the model using private funding or HUD grants, said Nick Coulter, cofounder of Person Centered Housing Options (PCHO) in Rochester. Some of the cities are partnering with such organizations as Pathways to Housing, which created Housing First in 1992.

Coulter said PCHO is managing 70 Housing First units scattered in apartment buildings and houses across Monroe County through a $1 million grant from HUD that also provides for case management to connect individuals with needed services. PCHO leases the units, and the individuals placed in the apartments sublet them, Coulter explained.

The program also pays for security deposits, the first month of rent and sometimes also the last month of rent so landlords are assured of payment in case of any damages, he added.

“We pay the full rent every month on time, and the person pays us for their portion of the rent,” he said. “So if they ever lose their income and don’t pay, we cover that (rent) so the landlord is never forced to chase the person around for money.”

To provide rent subsidy and case management through the local Housing First program costs about $13,000 per individual, Coulter said, and the low price tag is why the model has been gaining attention nationally in the last decade.

The model also is unique because providing housing with no barriers to access flips the script on being a landlord, Acuff noted.

“In typical affordable housing (situations) … a housing provider will say they want the best applicants, the best references and tenant history,” Acuff said. “We say we want the opposite. We want folks who have been homeless the longest. … We want to prioritize the people who have been in tents and sleeping under bridges.”

Greg Henry is grateful for that kind of compassion. Three years ago he was living in a tent city under the Frederick Douglass-Susan B. Anthony Bridge in Rochester, he said during an April 2 interview at the Dorothy Day House. The native of Branford, Ontario, moved to Rochester for a job at Bausch & Lomb in 1973 and later served in the military, married and had four children that he and his wife raised in Seneca Falls. When his wife died a few years ago and the company he was working for went out of business, the 62-year-old said he fell on hard times emotionally and financially.

If it were not for the Dorothy Day House, he said he would probably still be on the streets of Rochester.

“It’s helpful,” he said of the Dorothy Day House. “At least it gives me a chance to get back where I used to be.”

The next step in working to eradicate homelessness in Rochester and to help more people like Henry is for PCHO to increase the number of Housing First units, said Coulter.

His organization has an outreach team that scours the area to find homeless individuals who would benefit from the program. His office receives requests from other community agencies and takes walk-ins at their office space in Rochester’s Central Library.

“Anywhere you can imagine, there are homeless people,” he said. “We are out there all the time.”