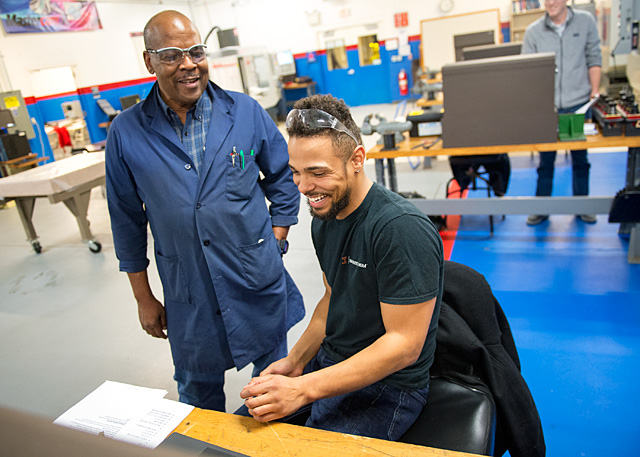 According to MCC officials, the college’s Economic & Workforce Development Center is able to connect students with more than 60 local employers in those industries.

College President Anne Kress created the center six years ago to better engage with employers in the Rochester region and create pathways to those industries for area residents, explained Todd Oldham, vice president of the center’s Division of Economic Development and Innovative Workforce Services.

According to data from the New York state Labor Department, skilled trades are expected to generate about 25,000 job openings statewide in each of the next several years (http://on.ny.gov/2ibDZwa). Forty-seven percent of these anticipated openings stem from projected growth in manufacturing, construction and service industries such as auto mechanics, paramedics and other health technicians, according to the labor department.

The college’s workforce center receives information about current employment trends and needs from an advisory board, Oldham said. The center also formed a partnership with the Rochester Technology and Manufacturing Association (RTMA), whose offices are located at MCC’s Applied Technology Center on West Henrietta Road in Brighton.

MCC’s programs are filling a great need in the local manufacturing industry, noted Lou Romano. The owner of Romold Inc. in Gates serves on the center’s advisory board and is a member of the manufacturing association.

"Every colleague that I know … could use employees right now," Romano said. "The doors of opportunity are immense."

Employers continue to struggle with an unmet demand for workers, agreed Kevin Kelley, RTMA president. On a national level, he said 600,000 vacancies exist in manufacturing companies.

Veronica Keymel holds up a project she is working on during one of Monroe Community College’s job training certificate programs Dec. 13.

"Rochester is a microcosm of that," he said.

Challenges in filling jobs will persist until more students are steered toward programs like MCC’s certificate, associate’s degree and 2+2 (community college plus university) bachelor’s degree, he said. RTMA provided MCC with its curriculum, machinery and instructors in the 1990s for programs offered at the Applied Technology Center and has continued to provide scholarships and job placement. More than 90 alumni of MCC’s manufacturing certificate programs have obtained jobs over the last three years, he said.

Manufacturers have faced shortages because in recent decades, students who might have struggled academically were "relegated" to career technical education while most school districts encourage four-year college education, Kelley remarked.

"But the employer community wants the best and brightest," he said.

Romano said MCC’s programs help employers like him because student graduates come into their shops with the fundamentals for a variety of metal-work trades, he said, noting that his company. Over the last 15 years, he said nearly all of the employees he has hired at his company — which specializes in inspection, design, machining and drilling — have come from MCC’s workforce programs.

"If you enhance your skills and you’re diligent, committed and focused, the market is yours to be able to make more money," Romano remarked.

The college also has partnered with Eastman Kodak Co. to create the Finger Lakes Workforce Development Center at the Kodak business park. The center was announced in November, Oldham said, and will use the park’s classroom and lab space to provide manufacturing-oriented programs in photonics energy; chemical and food processing, and training in such skilled trades as pipe fitting. The $11 million project is one component of the Finger Lakes Regional Economic Development Council’s Pathways to Prosperity, which is focused on workforce development tied to poverty reduction, according to information at monroecc.edu.

"We want to create value for employers and provide options for (older) students and individuals, not just young folks, in transition as well as for disconnected youths who otherwise might not have an option," Oldham said. "It’s a win-win for all parties and stakeholders."

Sammie Rockwell of Greece became one such displaced worker after losing his job of 26 years when Rochester’s Sentry Safe was sold last year. He first sought employment opportunities through Rochester Works!, which is a local agency offering career advice and linking individuals to training opportunities. Then he learned of MCC’s accelerated certificate program in precision tooling.

"The program was a good transition," Rockwell said before a Dec. 13 class session at MCC’s Applied Technologies Center.

The program consists of classes for six hours daily in two sessions: one from July to September and the second from September to December. Its accelerated pace is designed to prepare workers looking to find employment quickly, added student Veronica Keymel of Rochester.

Keymel, who had worked in jewelry repair, enrolled in the machining course after being laid off when her former employer fell on hard times a year ago, she said. A friend recommended an apprentice program at a local manufacturing company, for which she was hired after having applied for the MCC program.

She said she decided to pursue both, working full time the second half of last year while attending classes daily for the machining course.

Rockwell said he had a job lined up by the time the course wrapped up in December and feels well prepared. About 75 percent of students who enrolled have completed the course since its inception in 2013, and 74 percent were placed in jobs, according to MCC spokeswoman Hency Yuen-Eng.

"We learn a lot and it’s actually hands-on," Rockwell said of the program. "It gets you prepared to go out into the workforce."

Successful completion of the program makes it possible for local residents to work for any number of local companies or even start their own companies, noted Anthony McCollough, the precision tooling instructor.

"Once you get people to look at this (industry) as a profession, it becomes more attractive," he said.