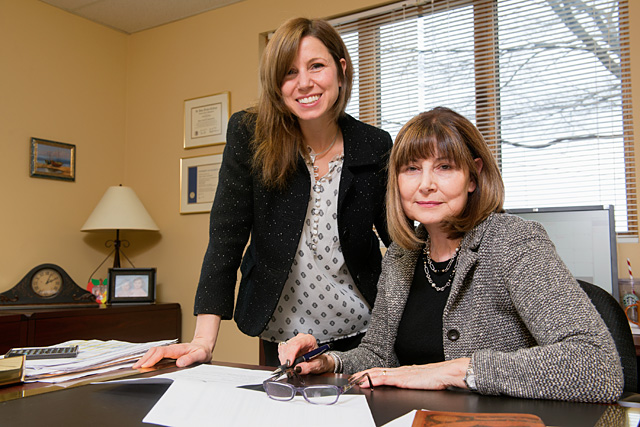 FAIRPORT — As with many entrepreneurs, Isabel Casamayor’s business journey began in the basement of her home.

The Barcelona native started her pharmaceutical company, the Caswood Group, in 1996 with just two employees — a secretary and her son, William, who still handles the company’s information technology department. Four years later, the company moved to its current location on Ayrault Road and currently employs about 50 people, Casamayor told El Mensajero Católico during a Feb. 22 interview.

The secret to her success, she said, is a simple one: persistence.

Sometimes, clients or competitors have underestimated her because she is a woman with an accent who also is soft-spoken, Casamayor said. Women can use that in their favor by proving false any assumptions made about them, she noted.

"I’m kind of a shy person," she said. "But you need to overcome that. More than anything, you need to be prepared for what every meeting or situation (may bring) so you can talk intelligently."

Casamayor moved to the United States with her husband, George, when he was hired by a company in Columbus, Ohio, in 1976. They moved to Rochester in 1980 for another job opportunity for her husband, she said. The family settled in the Fairport area.

Initially, she didn’t work but eventually found a job at the University of Rochester in one of their language laboratories, Casamayor said. She speaks four languages: Spanish, Catalan, English and French. She also obtained her bachelor’s degree in economics at the university.

Casamayor said she wasn’t sure what she would do after earning her degree. Upon graduation, though, the university gave her a directory of employers and she began calling every number on the list in alphabetical order, she added.

"Every day, I would call 10 companies until I got to P," Casamayor said.

A pharmaceutical company was looking for a secretary for its vice president of international business, she said. She took the job for a summer and then obtained positions in finance and marketing, said Casamayor, 68. She also went back to school at night and earned her master’s degree in business administration in 1994.

She was working as manager of sales analysis and market research when the company was bought by another in 1996 and she was offered a promotion. Casamayor turned it down because it required a move to Pennsylvania, she said, and she didn’t want to uproot her family.

"(But) I had a good sense of the different areas of the company, which allowed me to start this company, knowing especially finance and what the needs of a pharmaceutical company are," she said.

Casamayor said she thought of her company first as a telemarketing company. Then, she did more research, and the work evolved into a contract sales organization, or CSO, as it’s known in the pharmaceutical industry, Casamayor said. Working as a CSO entails hiring teams of pharmaceutical sales representatives for companies, she explained.

She provides training, benefits and compensation for these teams that are focused on marketing products, she said.

Her teams target such health-care specialties as dermatology, obstetrics and endocrinology — a niche she created for herself, as she is the only such privately owned company competing with global corporations for the same work, she noted.

"It’s hard to get contracts," Casamayor said of the industry’s competitiveness. "But once we get the contracts, our clients keep coming back."

She ensures her sales teams are knowledgeable in the medical specialties her company focuses on so they are qualified to meet with physicians, she explained.

To help stay competitive, her company also has created different segments. One is focused on recruitment of new employees, and the other involves hiring nursing staff to man booths alongside pharmaceutical company sales teams at industry conferences, Casamayor said.

Her daughter has been overseeing the nursing staff at these pharmaceutical conferences, she added. Mercedes Casamayor joined the company when she returned to the area with her own family after years of living in England. She has been serving as operations manager for six years.

While her background is in animation and motion graphics, Mercedes said she also has experience working as an independent sales contractor. For the Caswood Group, she also assists with vendor choices and making sure the company is following the proper procedures and protocols in the pharmaceutical industry.

"I never thought I’d be here today," Mercedes said. "But I definitely get a lot of satisfaction working with my mother and making sure (Caswood Group) is a successful business for her."

Isabel Casamayor said she herself never expected to be running a family business. All has worked out perfectly, she added, as her children have different skills and responsibilities. "I am very proud," she said. "To come into work every day and see your kids and see that they really want us to be a success. … It’s a great feeling."