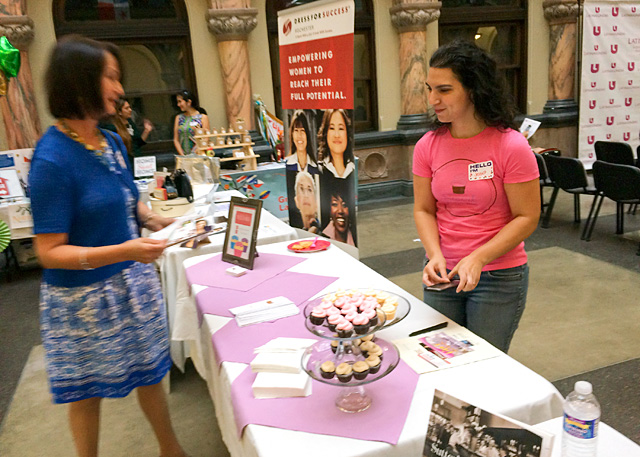 ROCHESTER — One of the most important considerations for a person who wants to start a small business is, "Why you?"

"Why would somebody want to buy a product from you? What makes you so special?" observed Jim Soufleris, a certified business adviser with the New York State Small Business Development Center.

"Unless you can answer that, the whole thing is done. It sounds like a simple question, but it’s thought provoking," Soufleris explained during a Sept. 21 interview with El Mensajero Católico.

Soufleris and SBDC, a partnership with the State University of New York with a local office at SUNY Brockport’s Metro Center in Rochester, offer free advice for potential entrepreneurs through one-on-one meetings as well as workshops. The workshops include an annual lecture series hosted by the Central Library of Rochester and Monroe County.

During a Sept. 7 workshop called "Start Your Business Out Right," Soufleris led a group of about 50 people gathered at the Central Library through questions and charts they should prepare and analyze before trying to get a new business off the ground.

"Some people are entrepreneurs, and some people are looking to create a job for themselves," he told El Mensajero. "Can both be successful? The more successful (person) has a drive that takes you to the next level."

Small businesses have a major impact on the economy in New York state, according to information from the U.S. Small Business Administration (http://bit.ly/2dkkLp3). In 2013, such businesses employed 3.9 million people, just over half of the workforce in the private sector that year. Minority ownership of small businesses increased nearly 32 percent between 2007 and 2012, according to the SBA.

Starting one’s own business opens up opportunities to better oneself and one’s community, Soufleris said. However, he noted during the Sept. 7 workshop that countless people have said they wanted to open restaurants, but their only experience in the field was that they enjoyed eating out.

Others dream of starting businesses because they think they have ideal locations. Location often is touted as a basis for business success, but it can’t be the only basis, he said.

"My fear about location is if somebody opens a place right next to you, are you still going to be competitive?" he added. "One thing I always believe you can compete on 100 percent every day is customer service."

Soufleris said his motto for good customer service "under promise and over deliver."

No matter what kind of idea a person has for a business, good customer service is a crucial way to stand out among competitors, he noted. So, when he meets with potential entrepreneurs, he goes through the "why you?" exercise and also has them envision their ideas by closing their eyes.

"The secret to success is recreating that vision as close as you can," he said.

If a person has vision as well as proven expertise, the next step is to create a business plan in order to obtain financing and investors, Soufleris explained. He has worked with people who only had half of the funds they would need to start their businesses, and said he advises them to wait until they can access the all the funding they need to fully realize their visions, he added.

Many potential entrepreneurs walk into his office and want to skip the reflection process, cutting straight to the "nuts and bolts" of a business plan, Soufleris said.

"But if the idea (for a potential business) doesn’t work, it’s a useless waste of time," he said of creating a business plan. "You don’t have to be first to market, but there has to be a reason you can do it (provide a service or product) as well if not better than anyone else in that market."

Another key to success is possessing a "high tolerance for ambiguity," noted Luis Martínez, a management consultant who attended the Sept. 7 workshop. The Cuban native who retired from Xerox Corp. eight years ago said he attends SBDC workshops to network with entrepreneurs in the area. Some people want to clock in and clock out of their businesses and have every aspect of the operation spelled out for them, he added. But part of being a business owner is making all the decisions, from raising prices to finding the next potential customer, Martínez noted.

"It’s all unstructured," he said of business ownership. "You have to have the temperament to be self-employed, the entrepreneurial spirit."

Even if a person has a service or product she believes in and the motivation to start a business, the paperwork involved in a startup can be overwhelming, Jessica García noted during Latinas Unidas’ second-annual business expo at Rochester City Hall Sept. 22.

Last spring, García and her husband took a micro-entrepreneurship course offered by the Ibero-American Action League to gain guidance and help with their business’ paperwork, which included food service certifications and obtaining a tax identification number, she added.

García is currently operating the two-year-old bakery business Swirl Cupcakes out of her home as she develops a business plan. Her vision is to run a cupcake food truck, which she said would fill a niche she finds lacking among local food-truck rodeos.

"I’ve been doing my research," García said. "I’m keeping an eye on the market."

To fulfill her dream, García’s her next step would be to purchase or lease space in a commercial kitchen. Until then, she will focus on word-of-mouth promotion of her cupcakes through family and friends, García said. Transitioning from a home business to a storefront or food truck, as in her case, without a base of support could prove disastrous, she said.

"You build up a clientele before you (open)," she added. "Without that foundation, so many businesses shut down just when they open."