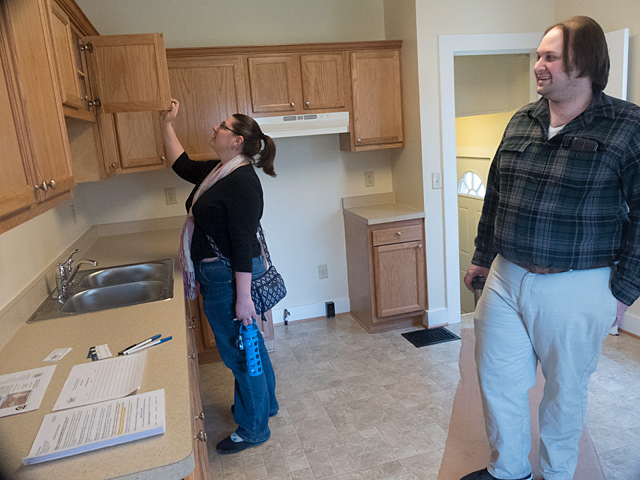 Lindsey and Chris Eklund look at the kitchen as they tour the 93 Wilmington Street house during an open house on April 2.in Rochester. Catholic Courier Photo by John Haeger

Prospective renters and homeowners are turning to local agencies for advice on their housing options as they confront a nationwide shortage of affordable housing for low-income families.

The Rochester region did not experience the foreclosure crisis — spurred by severe recession and a subprime lending bust — that affected millions of U.S. homeowners. Yet Susan Boss of The Housing Council said local residents are not immune to foreclosure proceedings brought on by illness or the loss of a job.

In 2012, The Housing Council — which has assisted tenants and first-time homebuyers since 1971 — provided foreclosure-prevention counseling and other resources to about 1,200 people at its peak, she said. While that figure since has declined, Boss said counselors still help 650 to 800 people each year, especially as the agency has expanded into the Finger Lakes region and now covers Monroe, Ontario, Wayne, Seneca, Livingston, Steuben, Seneca and Yates counties.

The house at 93 Wilmington Street in Rochester was open for visitors on April 2.

"In rare cases, people just need to sell their house … (because) by the time they come to us they’re too far gone and are already in foreclosure," said Boss, executive director of the nonprofit organization, which has been an affiliate of PathStone Corp. since 2013.

Also offering financing, counseling, mortgage and rental programs are such agencies as NeighborWorks Rochester and Ibero-American Development Corp. Meanwhile, government agencies like the Rochester Housing Authority oversee rent-voucher programs, such as Section 8, that subsidize the rent of tenants in privately owned houses or apartment buildings throughout Monroe County, explained Joel Kunkler, The Housing Council’s director of landlord/tenant services. The authority, which is funded by the U.S. Department of Housing and Urban Development, also manages agency-owner properties.

Creating and maintaining greater affordable housing options for individuals and families in the Finger Lakes is the mission of the Greater Rochester Housing Partnership (GRHP), explained Theodora Finn, the partnership’s executive director. The 25-year-old organization works with banks, governments and developers to boost the availability of affordable owner-occupied and rental housing units, she said.

"There is strong demand in our region for quality, affordable housing as well as a continued need to address vacant properties that negatively impact our neighborhoods," Finn added.

Since 2002, GRHP has purchased and renovated more than 700 houses that were then sold to first-time homebuyers with low to moderate incomes, Finn said. Homeowners receive financial education and agree to live in their new houses for up to 15 years. They may also qualify for grants to assist with down payment and closing costs, Finn added, noting that the program stabilizes neighborhoods and adds value to nearby properties.

More recently, she said, GRHP partnered with the State of New York Mortgage Agency (SONYMA) to provide grants to residents who purchase vacant, distressed properties in Rochester, Gates, Greece, Brighton and Irondequoit. These properties do not have to be single-family dwellings, and the purchasers must apply for the program before closing on their homes, meet income requirements and agree to live in their homes for 10 years, Finn added.

Developers of affordable housing, including rental developments, also may receive low-interest loans to finance such projects, Finn said. Boss and Kunkler hope that more apartments means more options for people who are disabled and for the working poor who are not eligible for other social services.

There are only 28 affordable and available rental units nationwide for every 100 "extremely low-income" households, which are at or below median income, accoording to a report (http://urbn.is/1K2IXFc) by the Urban Institute, a nonpartisan think tank. And a 2014 report (http://bit.ly/2nP3kiY) by the National Housing Conference found that 18.1 million households were "severely cost-burdened," meaning that more than half of their incomes went toward housing expenses.

Kunkler said he works with many individuals and families who spend more than 50 percent of their income on rent, including some people whose entire subsidies from the Department of Social Services go toward rent.

There is no hard and fast rule for the ratio, although the ideal percentage would be 30 percent of a person’s income, Kunkler said. "That doesn’t happen enough," he added.

The Rochester region ranks well in terms of housing affordability for homeownership and rentals, according to information from ACT Rochester. The ratio of median home value price to median household income was 1.9, which is much lower than the 3.5 state ratio and the 2.9 federal ratio, according to a joint initiative of the Rochester Area Community Foundation and the United Way of Greater Rochester measuring the area’s economic indicators.