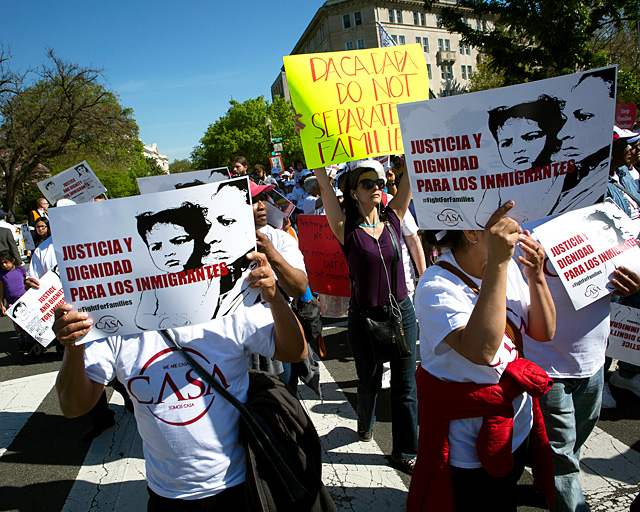 EDITOR’S NOTE: The last names of some people interviewed for this story were withheld in order to protect their privacy.

Local advocates and immigrant families were shocked when a tie vote by the U.S. Supreme Court blocked programs that would have allowed 4 million unauthorized immigrants to continue studying and working in the U.S. without fear of deportation.

On June 23, the court issued its 4-4 decision in United States v. Texas, which focused on the legality of President Barack Obama’s 2014 executive actions known as Deferred Action for Parents of Americans (DAPA) and an expanded version of the existing Deferred Action for Childhood Arrivals (DACA). DAPA would have protected workers from deportation for a certain amount of time and offer employment authorization. The existing version of DACA allows undocumented youths to request deferred action of potential expulsion from this country for a period of two years. The expanded program would have eliminated the original program’s upper age limit and moved up the date by which a minor must have arrived in the United States.

Both DAPA and the expanded DACA programs have been on hold since February 2015 when a Texas court issued a preliminary injunction in the case, according to information from the American Immigration Council (http://bit.ly/293fZL2). The Supreme Court’s tie vote allows the Texas injunction to stand.

Wally Ruehle, an immigration attorney with Rochester’s Legal Aid Society, said the decision was not what he expected after reading the transcript of the oral arguments that took place at the Supreme Court in the spring.

"I was cautiously optimistic that the court would overturn the injunction," he said.

Since the announcement of the tie decision, he has been talking with local agencies that work with immigrants and undocumented workers to reassure them that the original DACA program announced by the president in 2012 stands.

Through the DACA program, more than 700,000 young immigrants, also called DREAMers, have been authorized to work or study in the United States, according to the American Immigration Council.

"(M)ore than any other State, California has grappled with the practical realities of the issues that DACA and DAPA address," the brief stated. "California has long been home to the largest population of undocumented immigrants in the Nation and in the vanguard of the national debate about undocumented immigrants. California’s experience shows that expanded DACA and DAPA serve the public interest in stronger, safer, and more prosperous communities."

The programs would have generated 130,000 jobs in California and provided $3.8 billion in California taxes annually, the brief asserted.

For New York farmers, the reassurance they would have felt in having a stable workforce has been replaced with anxiety for themselves and their workers, explained Steve Ammerman, spokesman for the New York Farm Bureau.

Ammerman said he doesn’t know yet if the court’s decision will have an immediate effect on agriculture in New York. But farmers have already struggled with getting their farms prepared for the growing season this year because of delays in getting workers through the H-2A guest worker program, he said. H-2A allows U.S. employers or associations of agricultural producers who meet specific regulatory requirements to bring foreign nationals to this country to fill temporary agricultural jobs, according to www.uscis.gov.

"Hopefully, with a new president and when the election season is over with, Congress can get back to work on trying to find some kind of comprehensive reform," Ammerman said. "An enforcement-only approach to immigration could be disastrous for agriculture."

"Whoever the next president is (is) going to have to determine whether to continue to fight against this injunction (by the Texas court) or propose immigration reform," Ruehle added, noting that until then, the status quo remains for undocumented workers affected by the decision.

The Supreme Court’s decision did not bring the case to a close, however; it now goes back to the U.S. district court in Texas to decide whether to make the injunction permanent, Ruehle said.

As the legal fight continues, many local workers and students remain confused and wonder if they may be deported any time soon, noted Dr. John "Lory" Ghertner, a longtime local activist for the rights of immigrants.

"They never seem mad or upset with anyone, just confused and frightened," Ghertner said. "Hopes have been dashed so many times that they become resigned to a life they don’t deserve."

Yessica was one of those who at first did not fully understand Supreme Court’s failure to reach a decision until she spoke with Ghertner and other activists.

Having come to the United States from Mexico with her parents as a three-month-old infant, she has lived all but a year of her life in Texas or Rochester, she said. A graduate of Our Lady of Mercy High School, she applied to and was approved for the original DACA program. The 23-year-old single mother is studying at Monroe Community College and hopes to pursue a nursing degree at Nazareth College.

DACA has enabled Yessica to obtain jobs to support her child and help her mother, who had planned to apply for DAPA. Now, her mother will need to rely on odd jobs that will pay her under the table.

"She’s losing hope to be able to do anything for herself," Yessica said of her mother. "She wants to be able to provide for us. How is she going to do that? She’s not able to work. …Nothing changes for her."