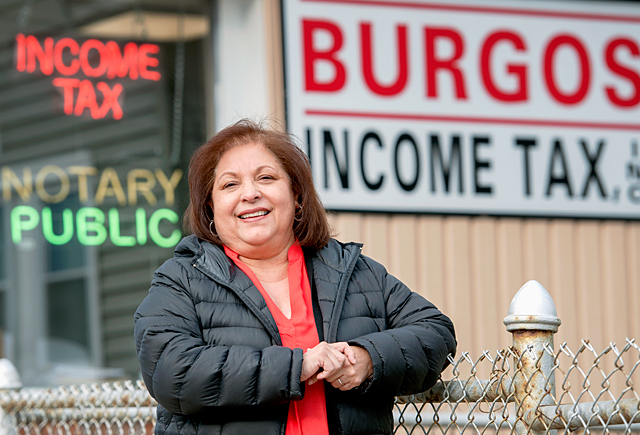 Instead of resting on the seventh day, she helps care for the matriarch of the Burgos family, whose eight children include government and business leaders in the community.

Burgos Torres has found herself in various leadership roles throughout her career and currently serves as the board chairperson for the Rochester Hispanic Business Association. She was one of the organization’s first members and created its business expo more than a decade ago, and it continued annually until 2014.

"She is passionate about helping Hispanic-owned businesses thrive and succeed," said Lisa Martínez DeVinney, who serves as treasurer for the RHBA board. "With her organizational knowledge and business experience, her appointment as board chair makes complete sense. …Vilma brings great enthusiasm to this role."

As only the second woman to lead the association in its 25-year history, Burgos Torres said she was surprised by the board’s decision last fall to elect her as chairperson.

"It really was an honor that they entrusted me with that (position)," she said. "But no organization can exist with just a leader. … This board, they are so good."

For example, she said, the association runs like a well-oiled machine during tax season when she is consumed with her work for Burgos Tax Income Inc., which her younger brother, Al, opened in 1991. He got his start in the business when she left the country for her former husband’s job and was not available to help fill out tax forms for family members and friends as she had done since she was a teenager, she said.

"She is a team-player and encourages the board to meaningfully contribute to all decisions made about the RHBA," noted Martínez DeVinney. "In this spirit, I would describe Vilma’s leadership style as collaborative."

Board member Grace Tillinghast, who was the first woman to serve as chairperson, said Burgos Torres’ election was a natural choice. She has served on the RHBA’s board for many years as secretary and has been with the organization since its inception.

"She is a person with integrity who is dedicated and well-respected in the Rochester community and is member of one of the oldest Hispanic families in the city," added Tillinghast. "As we say in my country, ‘a true lady.’"

Burgos Torres is the oldest of eight, including one cousin whom her family raised. Her brother, Roberto Burgos, who also helps out at the tax office, retired as the city’s senior community housing planner about three years ago. Luis Burgos formerly served as the city’s commissioner of recreation and special services, the same office for which their father had worked for 27 years beginning in 1959.

"My brothers and I meet for coffee every week," she said. "We are a real close family. We even take vacations together."

Burgos Torres was born in Aibonito, Puerto Rico, and moved to Rochester with her parents, José and Liduvina, and two of her brothers in 1954. Her father instilled a strong work ethic in his children, she said.

"He was the hardest working man, and held two and three jobs to support us as the family kept growing," said Burgos Torres, 67.

The family grew up in Rochester’s Baden Settlement area, she said. After graduating from Benjamin Franklin High School, Burgos Torres went on to Monroe Community College with the intent to work in human services, she said. Upon earning her degree, though, she couldn’t find a job in that field so she began working in the employment division at the Urban League of Rochester. That position led to a marketing job with the state Department of Labor, where she worked on and off for more than three decades, she added.

"I always say that God takes us where he wants us to be, not where we want to go," Burgos Torres remarked.

While raising her son and three daughters, she took time off from her working for almost a decade to travel with her former husband, who worked for the U.S. State Department. The family lived in Pakistan, Uruguay and Miami, and she said the experience gave her children a great education.

"They learned what real poverty is," noted Burgos Torres. "They also got to experience incredible history and got to understand other cultures."

When the family returned to the U.S., she resumed her work with the labor department, where she oversaw marketing to businesses and employers in the Finger Lakes region. Her efforts led to the creation of an annual job fair, which continues to this day, at the National Technical Institute for the Deaf, she said.

Burgos Torres retired from her state job in 2007 but soon joined her brother’s tax firm, returning to her roots as a tax preparer for family, friends and neighbors.

Martínez DeVinney added how she admires Burgos Torres’ ability to keep her family as a priority, along with her work and service commitments.

"She is someone I consider a mentor, and I know there are many others who would say the same thing," she added.