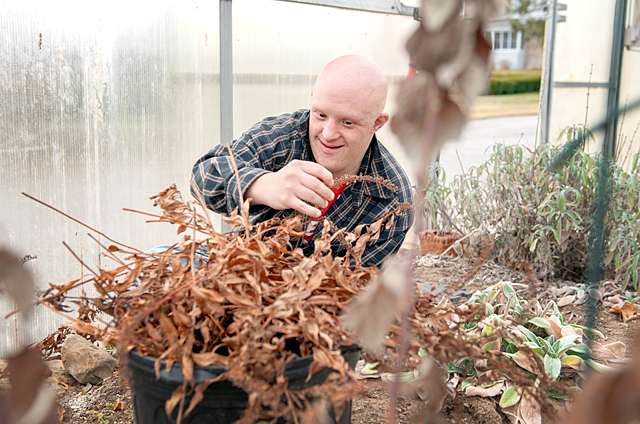 Nearly two decades ago, a few local entrepreneurs had a vision to create innovative businesses that could be profitable and address such social needs as providing jobs and revitalizing neighborhoods.

One of those entrepreneurs was David Dey, who said he wanted to create and replicate business models that would address societal needs. After writing a master’s thesis on social entrepreneurship in 2001, he received a two-year B. Thomas Golisano Foundation research grant to create the Institute for Social Entrepreneurship at Roberts Wesleyan College in 2002. Four years later, the institute became an independent organization in Rochester’s High Falls area. Its purpose is to help entrepreneurs or existing businesses design and create sustainable solutions to social needs.

Since then, Dey and his staff have worked on social entrepreneurship with a variety of groups, including Springdale Farm in Spencerport. According to Director David Pieters, the farm is located on land owned by Monroe County and is run by Heritage Christian Services, a human-services agency that serves people with intellectual and developmental disabilities and provides community awareness on inclusion.

Springdale Farm provides education and community programs, an operational model of robotic milking and a daytime rehabilitation program for area residents with developmental disabilities, explained Pieters. Participants in the rehabilitation program help care for the farm animals and the petting zoo; assist with ground maintenance and community outreach services; and work in the farm’s greenhouse, he added.

"It’s a social venture. It’s a community venture," Pieters said of the farm. "We have different volunteer groups help out with different things."

Raising fund is one activity in which the farm needs help, Pieters said, noting that the farm enlisted the Institute for Social Entrepreneurship to find ways to sustain its operations. The institute helped Heritage create a business and marketing plan for the farm, which led to securing grants and loans to expand its operations, according to information from Dey. The farm’s milk is now sold to Upstate Milk through a partnership with Colby Homestead Farms, Pieters said, while another local farmer rents some of Springdale’s land and provides a portion of his crops to feed the farm’s animals.

Despite growth in social entrepreneurship, city residents still face longstanding barriers, including language and transportation, to creating businesses that would help alleviate such social problems as poverty, Dey said.

"You can take any area of the city and develop social entrepreneurs and solve social issues and economic issues and any other issues in that area," he remarked.

For example, a client recently came to the center with an idea for reducing energy costs for city homeowners, Miller explained.

"If this (product) is able to cut energy costs, that means more money coming into a household, which contributes to economic development," Miller said. "That means people are spending more money within that area, and they are also able to have more money toward getting self-sufficiency. It’s like a domino effect. One thing is dependent on another."

The Center for Urban Entrepreneurship, which was founded in 2012, offers consulting, workshops, and Minority and Women Business Enterprise certification, she said, as well as youth programs to foster future business leaders.

Targeting youths is an important element of social entrepreneurship, since today’s students have a more global outlook, noted Natalie Antal, associate director of the Ain Center for Entrepreneurship at the University of Rochester.

"The students in the past decade … have the mind-set of students in the 1960s and ’70s," she said. "They really want to do (good). They don’t just want profits. They think social responsibility. … They’re just so much aware of everything going on in world and all those causes and injustices they want to fix."

As part of finding such global solutions, she said students at the Ain Center have been involved in the Tibetan Innovation Challenge, a collegiate social entrepreneurship competition launched last year. The competition benefits Tibetan relief efforts in India and challenges students to develop self-sustaining businesses for Tibetans.

The center also offers a Kauffman Entrepreneurial Year (KEY) for one student to spend a tuition-free year at the university to launch a social venture, she said. KEY projects have included Art Awake, an annual event a student developed to connect the university and the community through art and music, Antal said, while another student started a microfarm to provide produce for the university campus.

A social orientation also is part of some traditional business plans produced through the center, she said, noting some have earmarked a portion of profits for donation to certain causes.

Dey pointed out that a true social entrepreneur blends the goals of creating a successful business with improving social outcomes, in essence developing two plans in one.

Dey put his thesis on social entrepreneurship into practice more than a decade ago by creating a business called The Arnett. The business helped him test one component of his thesis: community entrepreneurship development that targets a specific geographical area for a social venture that can grow and sustain itself.

He purchased a boarded-up building on Arnett Boulevard in Rochester and raised funds to refurbish it. He then secured business tenants on the first floor and rented out the second-floor, market-rate apartments to residents. The project proved an inner-city social venture could be successful, he said.

"Then, the economy shifted and we lost our bank funding," he recalled.

Yet Dey said The Arnett’s initial success showed the possibilities of social entrepreneurship, and its failure illustrated the importance of having the right team in place when embarking on such a venture. He said, for example, that he should have brought in a developer to help with building issues so that he could focus on the people in the neighborhood and identify potential entrepreneurs in the area who could continue with what he had started.

"We want to show replicable models," he said.