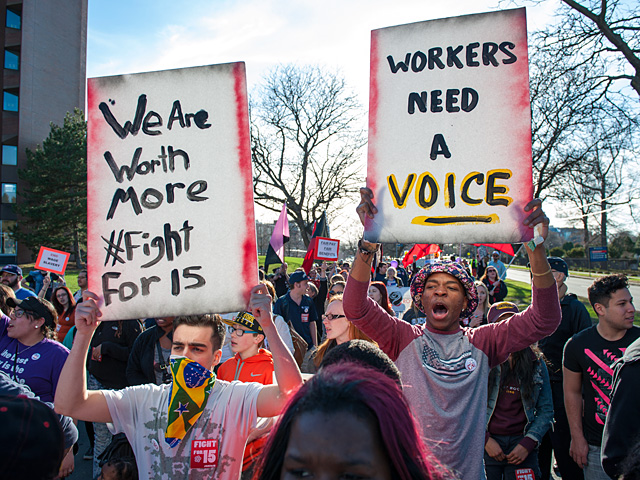 Edith Clemons works three jobs and said she barely makes enough to support herself and her three children, let alone have spare time to spend with them.

Earning about $12.80 an hour at her full-time job with a home health-care company, the Rochester woman makes more than the current $9-an-hour minimum wage in New York. Knowing the challenges she faces in supporting her children as the sole provider in her household even at a higher-than-minimum wage, she joined union 1199SEIU’s efforts last year to "Fight for $15" to help workers earn a more livable wage, she said. The union represents health-care workers.

"The cost of living keeps going up," said Clemons, who is a home health aide and primary-care assistant. "Even making $12 an hour is not enough, not sufficient to cover the costs of living in New York state."

This past spring, Gov. Andrew Cuomo approved a bill to gradually increase the minimum wage to $15 an hour in the downstate area by 2018. In the upstate region, the minimum wage will reach $12.50 an hour by 2020, with an increase to $15 on an indexed schedule that will be set by the director of the state’s Division of Budget.

Activists maintain that these rates are not enough to increase self-sufficiency for families so they no longer need social services. Yet business owners and leaders were relieved that the Legislature didn’t raise wages more quickly and also acknowledged the differences in the cost of living and operating costs in upstate New York compared to downstate.

"Although the minimum wage increase is a negative for business, our legislators found a way to ease the blow somewhat for our area by scaling the increase differently for upstate and downstate," according to a statement from Rochester Business Alliance President Robert Duffy.

Al Burgos, owner of Burgos Income Tax Service, said raising the minimum wage poses a challenge for business owners who also have to scale up the salaries of their more skilled workers. That may mean a reduction in workforce, increasing the workload of employees who remain, or passing increased wage costs to customers, he said.

"We do care about people," he said. "But to keep our doors open, we have to make a little profit. … You can’t bite the hand that feeds."

Last year, marches and rallies took place across the country and across the world in support of a $15 an hour minimum wage. Initially, the focus was on fast-food workers, but advocacy efforts in New York expanded to include all workers. Metro Justice, University of Rochester student groups, several local union chapters and members of Rochester ACTS (Alliance of Communities Transforming Society) took part in the local campaign.

Even though the state raised the minimum wage, the fight for a living wage for workers continues, said Bruce Popper, vice president for 1199SEIU in the Rochester/Corning area.

With Rochester’s poverty and childhood poverty rates among the highest in the nation for a city its size, the only real way out of poverty is to raise wages to a level where people can become self-sustaining and no longer need social services, Popper explained.

According to the Rochester-Monroe Anti-Poverty Initiative, a single mother with two children who earns $18 per hour, or $37,500 per year, would be considered self-sustaining, said Popper, who serves on the initiative’s steering committee. In Monroe County, more than 37 percent of workers earn less than $18 per hour, according to a study by the Fiscal Policy Institute (http://bit.ly/29cLboh).

He noted that workers who earn less than $18 per hour may still need social services to make ends meet, but that those earning $15 an hour or more no longer qualify for assistance, he added.

"People are juggling, especially in the winter when have to pay for (heat)," Popper said. "Can you buy your kids a backpack or decent clothes? … When all those things come together, something’s got to give. Either you get outside assistance or you’re not making it."

Between rent and utilities costs, Clemons noted, it’s nearly impossible for her family of four to survive on the $12.80 she makes per hour, which is why she has to supplement her income with two other low-wage jobs. Clemons earns about $26,000 before taxes from her job working 40 hour per week.

"You’re not making enough money to come out of poverty," she said.