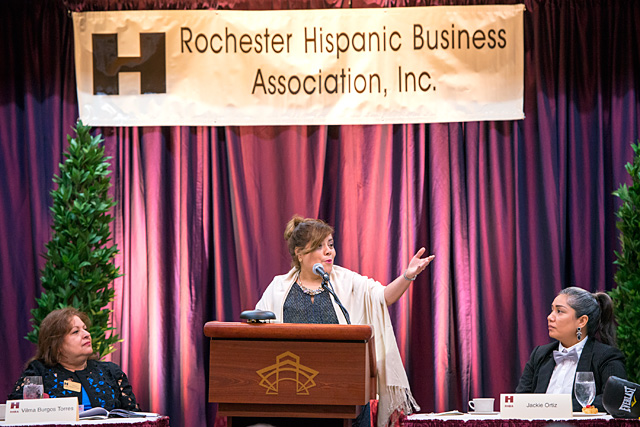 ROCHESTER — As one of a few female promoters in the world of boxing, this year’s Rochester Hispanic Business Person of the Year said part of her role as a business owner is to give back.

In accepting the award, the founder and president of Pretty Girl Promotions, a boxing and mixed martial arts promotion company based in Rochester, acknowledged the late Carmen Basilio, a world champion boxer. Vázquez Simmons also thanked his widow, Josie Basilio, who attended the gala to support the promoter’s efforts to keep his legacy alive.

"Coming from humble beginnings, Carmen appreciated everything," Vázquez Simmons said. "He would often say wealth was not about money in your pocket but what you give back to your community. He was particularly generous with youth … and (was) often saying giving back to the youth was just as rewarding as winning a world title. That generosity inspired me."

In his honor, she has created the Center City Boxing program in Rochester to work with youths in the city, she said.

Center City participants have been meeting several times a week at Don Samuel Torres Park on North Clinton Avenue, where they focus on building character, discipline, self-confidence and self-control. The program currently serves 13 youths, and Vázquez Simmons said she is working on securing funding for the Carmen Basilio Training Facility that she hopes to open as early as this fall.

"I strongly believe this boxing program has and will continue to make a positive influence in our community," said Vázquez Simmons, who was recognized in 2014 as "Person of the Year" by the Bare Knuckle Boxing Hall of Fame in Belfast, Allegany County.

It was her desire to help young boxers that first led her to become a boxing promoter, she explained, because she wanted to organize better events where boxers were paid fairly. She also wanted to reverse the decline she had seen years ago in local boxing.

"As a business owner, I felt it was my responsibility to give back to the community that did so much for me," she said. "Muhammad Ali said, ‘Service to others is rent you pay for (your) room here on earth.’ I hope to continue making my contribution until my rent is paid in full."

That attitude of caring is why Kelly Mullaney said she nominated Vázquez Simmons for the RHBA award, since she not only brings boxing entertainment to the community but also teaches young boxers about treating their careers like a business.

Jackie Ortiz (left) assists key note speaker MCC president Dr. Anne Kress in putting on a boxing robe before her speech Sept. 20 at the Rochester Riverside Convention Center. The theme of the gala was boxing in recognition of the 2016 Hispanic Person of the Year Mercedes Vazques Simmons, owner of Pretty Girl Promotions, a full service boxing promotion company.

Anne Kress, Monroe Community College president, said Vázquez Simmons’ story also illustrates how a successful person usually receives help from others along the way. So, she asked the Latino business leaders gathered at the Sept. 20 event to create opportunities for young people in the community.

And those opportunities may pop up in unexpected places, she noted.

For example, Kress was having dinner with her children at a local fast food restaurant when she saw a group of young men, one of whom was wearing an MCC sweatshirt. When the young man in the sweatshirt stood up to leave for a class, she said his friends encouraged him to skip it, telling him that more people without college degrees obtain jobs than those with degrees.

"I thought I was in an afterschool (special)," Kress said. "Here was my chance to do something."

She approached the student and urged him to go to class, since having a degree would be worth more to him than he could realize in that moment.

"I thought, ‘What if I hadn’t been there?’" Kress remarked.

Too many young people of every ethnicity drop out of college, she said, but there is a 20 percent gap between Hispanic youths and all other groups when it comes to graduation rates in New York state. Given six years to complete a two-year associate’s degree, only one in two Hispanics earn that degree, she said.

Of 11.6 million jobs that were created in the U.S. during the economic recovery from the Great Recession of 2008, 99 percent of jobs went to workers with some form of college credential — whether a certificate, an associate’s degree or a bachelor’s degree, she added.

"You need college credentials in the economy to find a job," Kress said.

Not all students are going to follow a traditional college route, she added, but there are still careers out there for them. By serving as advisers or mentors, local business and community leaders can connect young people to college scholarships as well as certificate programs in such industries as optics, precision manufacturing or information technology, Kress said. Those kinds of industries face a shortage of workers, she added.