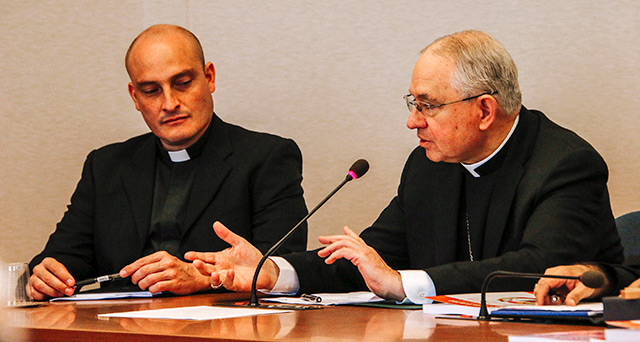 VATICAN CITY — A delegation of U.S. bishops and laypeople came to Rome to share with Pope Francis and Vatican officials the joyful experiences and valuable recommendations that came out of last year’s Fifth National Encuentro.

Archbishop Jose H. Gomez of Los Angeles, vice president of the U.S. Conference of Catholic Bishops, told Catholic News Service that he was looking forward to announcing “the good news” about what they’ve learned and how the process has been unfolding.

“When we talked to the Holy Father” as they were still preparing for the September 2018 event, the archbishop said forming and inspiring missionary disciples across the nation “was our dream, and now we can share with him that it is happening.”

Archbishop Gomez along with Bishop Nelson J. Perez of Cleveland, chairman of the USCCB committee on cultural diversity in the church, and Auxiliary Bishop Arturo Cepeda of Detroit, chairman of the subcommittee on Hispanic affairs, led a delegation to the Vatican Sept. 13-18. They were presenting the “Proceedings and Conclusions of the Fifth National Encuentro of Hispanic/Latino Ministry,” and they spoke with CNS Sept. 16.

The materials they have been sharing offer a summary of the challenges, opportunities, recommendations and successful practices when it comes to pastoral care and accompaniment of Hispanic and Latino communities in the United States and their call to be missionary disciples.

The national gathering of V Encuentro in Grapevine, Texas, was a historic gathering of Hispanic/Latino leaders in ministry, delegates from dioceses, church movements, schools and Catholic organizations from across the United States. The bishops estimated more than 1 million Catholics had participated in parish, diocesan and regional encuentros in the two years prior to the Grapevine meeting.

One of the things they are telling the Vatican, Archbishop Gomez said, is that “Latinos in the United States are excited about their faith.”

“The church in the United States is alive, it’s a young church” with an estimated 50 percent of Catholics who are 18 or younger being of Hispanic or Latino origin, Bishop Cepeda told CNS.

“It is wonderful,” he said. “They are bringing in the future of the church, but at the same time, they are the ‘now’ of the church,” which brings “a lot of joy and hope.”

Bishop Perez told CNS he’s telling Vatican officials how excited people are to “actually be missionary disciples” going to places Pope Francis has called “the peripheries.” People have been going “to places where the church isn’t always present,” he said, like prisons and street corners, and to those who may feel disenfranchised, like young people and undocumented workers.

“The political climate in the United States with immigration and our undocumented brothers and sisters has been very challenging, in fact, very painful,” Bishop Perez said.

But the encuentro process, which began at the grassroots level in 1972, “providentially created the space, the forum, for people to come together and share their uncertainty, their fear and feel the support, the warmth of a Christian community,” he said.

Bishop Cepeda said this moment has prompted the church to be “the voice of the voiceless. It’s a moment for us to bring them out of the shadows, to be able to work for a reform, an immigration reform that is integral and that does not separate families.”

“We want to be the voice of a nation that welcomes immigrants and we will be the ones transforming our church and our nation if we do so,” he said.

Archbishop Gomez said the increasing presence of Hispanic and Latino Catholics and the work and visibility of the encuentros is “helping Latinos to understand they are an integral part of the life of the church and the life of society in the United States and it’s calling them for leadership.”

“I hope that helps everybody in the United States see that Latinos really want to participate in the life of society and that brings real immigration reform in our country,” the archbishop said.