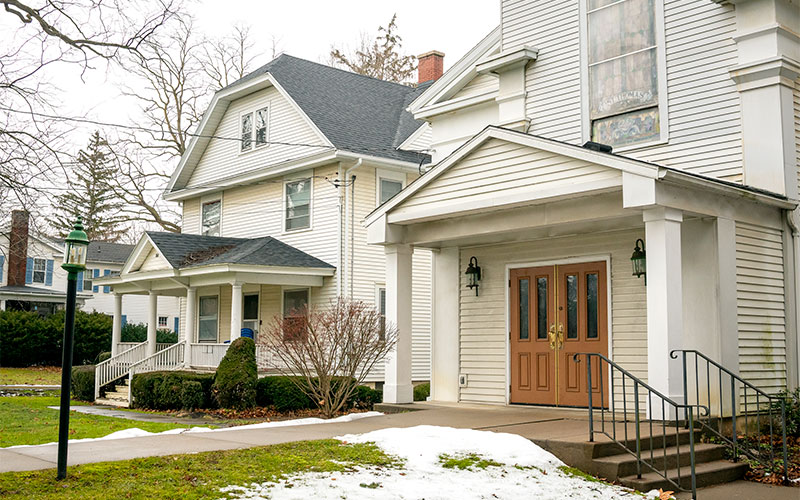 The former rectory at St. Thomas Aquinas Church in Leicester is now home to the new Tepeyac Welcoming Migrant Center, which opened in January. (EMC photo by Jeff Witherow)

In response to the growing need to support migrants throughout Livingston County, the Diocese of Rochester’s Department of Pastoral Services has opened a new migrant center in the Town of Leicester.

According to Grizard, the county has been very supportive of the center, which will continue to rely on volunteers and donations as well as partnerships with such organizations as Catholic Charities, Finger Lakes Migrant and SUNY Geneseo to help serve the area’s migrant community.

“We want to make sure we offer (migrants) what they need to live their faith and to be integrated into our society,” Grizard told El Mensajero Católico. “Many of them have Catholic backgrounds, they come from countries which are heavily Catholic, and so we as a diocese find it critical to respond to the needs and their presence.”

The Tepeyac Welcoming Migrant Center is scheduled to have an official opening celebration March 28, with a Mass celebrated by Bishop Salvatore R. Matano. Grizard said the center will offer migrants information and assistance in four key areas: immigration, health and well-being, language and literacy, and transportation. The migrant ministry team from Parish Services has been working with local organizations and volunteers to provide these resources, he said.

The center is located in the former rectory of the St. Thomas Aquinas Church, which is part of St. Luke the Evangelist Parish. There is currently a monthly Spanish Mass celebrated at the church by Father Jesus Flores, diocesan coordinator of migrant ministries. Jorge Salgado, regional coordinator of migrant ministries for northwest Monroe and Livingston counties, will serve as the center’s coordinator and hopes with its creation that the offering of a Spanish Mass can be expanded to more than just once a month.

Grizard noted that the center’s name comes from the Hill of Tepeyac in Mexico City, which was the site of Our Lady of Guadalupe’s appearance to St. Juan Diego in 1531.

“Tepeyac is also known as a place where many miracles occurred for the (Tepeyac) community,” he said.

Salgado added that many of the migrants living in the area are from Mexico, which motivated the migrant ministry team to name the center after the place of miracles, so it would resonate with the migrant community.

According to Grizard, creation of the Tepeyac Welcoming Migrant Center is among several efforts that diocesan migrant ministry has undertaken to promote an effective pastoral response to the needs of underrepresented cultures, individuals and families as they integrate into the community.

The need for migrant-related efforts originally derived from the cultural difference between Hispanics who are U.S. citizens and other Hispanic immigrants who cannot so easily establish themselves in the U.S., according to data contained in the diocesan pastoral plan for Hispanic ministry (http://bit.ly/DORHispanicMinistry).

The increasing struggle of Hispanic immigrants like those from Mexico resulted in a shift of focus within diocesan Hispanic ministry, Grizard said, leading to the creation of the migrant ministry, which seeks to build up migrant individuals as people of faith by welcoming them into the local Catholic community.