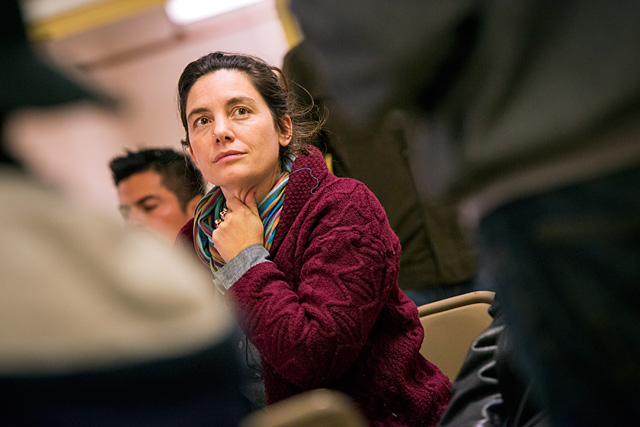 LEICESTER — A group of undocumented immigrants is helping spread the word and garner support for a campaign to allow workers like them to obtain New York state driver’s licenses.

The Green Light: Manejandos Juntos (Driving Together) New York campaign seeks a change in current policy to allow anyone to obtain a valid driver’s license without requiring Social Security Numbers, explained Luis Jiménez, a dairy farm worker in Livingston County who has lived in area since 2004. The change would allow the use of foreign passports as identification in the application process and would require those applying to comprehend English and existing traffic regulations, he said.

In 2007, activists lobbied former Gov. Elliott Spitzer to issue an executive action to allow undocumented workers to once again obtain driver’s licenses, said Carly Fox of the Worker Justice Center of New York. County clerks and other state officials then came out against the move, and Spitzer caved to public pressure in part because of the personal scandal enveloping him at that time, she said.

Activists then backed off of the issue until 2013, Fox said, when the push began anew to return the driving law to what it was prior to 2002. That year, a group of activists called Unir (Unite) gathered to formalize its network and chose driver’s licenses as one of the issues it would tackle, she added.

Fox said she would love to have an executive action allowing undocumented workers to obtain driver’s licenses, but to do it with a groundswell of support and buy-in from community leaders around the state.

To build that support, immigrant groups and workers like Jiménez have formed coalitions around upstate New York to talk to farmers, other workers, community groups, churches, state representatives, and urban and suburban leaders, he said. Since last spring, members of the campaign have hosted gatherings throughout Livingston and Wyoming counties that were attended by nearly 30 people each, he said. Campaign leaders also hope to branch out to other counties in the region, including Monroe, where they are focused on meeting with city leaders, Jiménez said. Rochester’s Ibero-American Action League is assisting with making some of those connections, Fox noted.

Jiménez said the campaign also is reaching out to insurance companies.

"These companies will also benefit (from a change in the law)," he said. "We want to get as many allies as possible."

Jiménez said that some farmers have indicated their support as well, noting that they also would be important allies in the campaign.

"We want to leverage their power so our campaign can have a bigger impact," Jiménez said.

"There’s a lot of work to be done. But it is the moral thing to do," she said of supporting the campaign.

That’s why the time is now for the initiative to move forward, Rosario Escher added, because Gov. Andrew Cuomo has publicly stated his support for the state to be a sanctuary for immigrants.

"This is not good for families," Rosario Escher said of preventing undocumented workers from obtaining driver’s licenses. "You have farmworkers who have to stay at their homes and have to pay someone to come and get them and take them (anywhere). … If you have a child that is ill, or you have an emergency, you don’t have a way to get them to a hospital."

"Freedom of movement is something that has a huge impact on the undocumented community in upstate New York," Fox remarked. "This (allowing undocumented workers to obtain driver’s licenses) is a way New York state can show how immigrant friendly it is — welcoming them within the parameters of our New York state governance to ensure everyone that we have safer roads. Everyone (would be) driving legally, with permission, insured."

Fox said that for the campaign to be successful, the governor will need to hear from as many sectors as possible, including the faith community and social-justice groups. The workers and activists will be working tirelessly with all their networks to garner that support and potentially introduce legislation this spring, she added.

"Immigrants are the lifeblood of this state where towns are dying, schools are merging. Immigrants are keeping them alive," Fox said of the state’s rural areas. "Many towns upstate don’t have the infrastructures for public transportation so folks can get rides on their own. … We need organizations to cosponsor and allies to help … to get everyone on board."